Wojtek to attend the Oscars?

Well in 2014 or 2015 perhaps! We all know his story, but Hollywood has apparently only just discovered it. 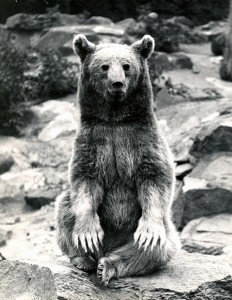 As you all know, Wojtek was adopted by soldiers of the 22nd Artillery Supply Company of the Polish II Corps in 1942 and helped move ammunition during the Battle of Monte Cassino.

Now Brendan Foley, a writer and director from Belfast, has bought the film rights for “Wojtek the Bear”. He plans to bring his story to the big screen with Ned Dowd, who worked as the producer on Mel Gibson’s Apocalypto.

Mr Foley said: “It is an amazing story- a bit like War Horse but with humour and pathos alongside the action, and the bear is a real character.”

It’s said that Steven Spielberg’s DreamWorks studio which made War Horse is interested in the story.

Mr Foley said: “After the script is written we will discuss production possibilities both in Europe and Hollywood in more detail. We already have early interest from both sides of the Atlantic, but it will all depend on the script, which we hope to have ready to bring to Cannes 2013. Personally, I’d love to shoot some of the film in Scotland, but that will depend on funding and where else we are filming.”

Wojtek was bought as a cub and grew up with the soldiers who fed him condensed milk from an empty vodka bottle and later honey, marmalade and syrup. The large bear lived in a tent with the men, drank two bottles of ale a day and used to swallow lit cigarette and exhale smoke as his party trick. He was taught how to salute when greeted and was enlisted as a private soldier with an official rank and number. He became a legend when he helped in the battle of Monte Cassino where he used his giant paws to carry heavy boxes of mortar shells from trucks to gun emplacements.

The image of him carrying a shell became the regiment’s official emblem.

After VE Day, Wojtek was posted to Berwickshire with some of his Polish comrades-in-arms and later taken into the care of Edinburgh zoo in 1947 as an attraction until he died there in 1963.

Aileen Orr, the author of the book “Wojtek the Bear” sold the film rights to Mr Foley. She heard the story growing up in Berwickshire and by visiting Edinburgh Zoo.

She is now part of the Wojtek Memorial Trust. They are raising funds to create a statue of Wojtek with a Polish soldier minder. They want the statue to be placed on a plinth made from stone quarried from the Polish soldiers’ former camp in Berwickshire and displayed in the Scottish capital. 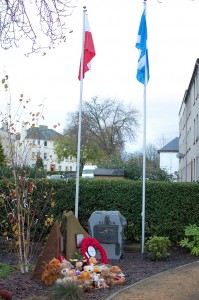 “I knew after speaking to one of the Poles who was in the camp that I wanted this statue to be a moment in time reflecting what the bear did here in the Scottish Borders.

“He was free to run around; he was humanised and had no idea he was a bear; he thought he was a soldier, and so he could wander down the road with one of the men and just as villagers stopped to speak, he would stop and listen to the exchange. After a while, this was not deemed to be a remarkable thing as everyone got used to seeing him. But it is a remarkable story.”

I hope that Katy Carr’s rendition of his song becomes part of the official sound track and the film makers do his amazing story justice.

As coffee mugs, tee shirts and even a Wojtek themed shopping bag are already available to buy, and he was honoured by a reception in the Scottish Parliament in 2009, making a major feature film of his life doesn’t sound that bizarre. I’m looking forward to seeing it.