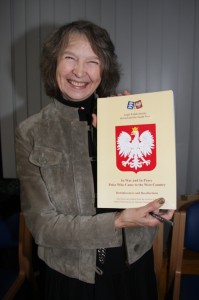 Sheila shows off the book

A new book tells the hidden history of Poles in the South-West.

The Anglo Polish Society, Bristol and the South West (APS) is delighted to be able to announce that their long awaited book “In War and in Peace – Poles Who Came to the West Country” has finally been published.

This book is the second of our ambitious three part Polish History projects to be completed with funding from the Heritage Lottery Fund.  In its 400 pages it encompasses a huge amount of Polish history much of which, owing to Soviet censorship is unknown to the people of Poland to this day.  Without this book it would almost certainly be lost for ever.

These are family stories told by those who experienced the events, or by their close relatives; however they also form a vital part of British, Polish and international history.  They cover the brief interwar period during which time Poland was a free and independent state, the German and Soviet invasions, imprisonment and concentration camps, deportations, the Soviet Gulags and subsequent escapes through the Middle East.  Experiences in wartime camps in Persia, India and Africa as well as the lives of those already in the UK are described.  The well documented heroic exploits of Poles fighting with the Allied Forces in WW2 are told from the personal viewpoint of those who took part and naturally Wojtek the famous “Soldier Bear” makes an appearance.

Settling in alien lands after the war’s end brought very different highs and lows to different families; all their experiences can be found within our book.  Finally there are the stories of those Poles, both adults and children, who chose to come to Britain after Poland regained her freedom and joined the EU.  These are very different stories but equally important.

If none of this excites your imagination surely a story entitled “My Polish Great Grandmother was born in a Wigwam with the Chippewa Indians in Bethany, Michigan, USA” must.   If you want to know more buy a copy of the book for yourself.   Unbeatable value at £18 for 400 pages.

The book was launched at a special event on 28th January 2014 in The Apostle Room, Clifton Cathedral in the presence of The Lord Mayor of Bristol Councillor Faruk Choudhury.  Read more about our book launch.

If you wish to save the postage price and collect the book from Bristol, or require an international postage quote, please Contact Us.