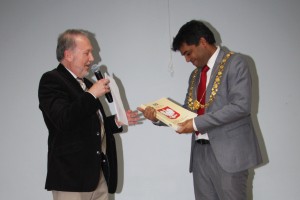 The Lord Mayor of Bristol, Councillor Faruk Choudhury accepts the first copy of our book from Chris Ottewell officially launching our book.

We were also delighted that Mary Prior, HM Lord Lieutenant of Bristol, and her husband were also able to attend along with Councillor Ian Boulton the Chairman of South Gloucestershire Council and Fr.Stefan Wylężek, Rector of the Polish Catholic Mission of England and Wales.

Most importantly a large number of contributors, members and guests were able to participate.

Chris introduced the guests and said a few words about the origins of the APS and the very long links between Poland and Bristol including the plaque in Queens Square which proudly proclaims: The Polish patriot Tadeusz Kościuszko stayed here June 1797.

Sadly our President Jan Mokrzycki was unable to attend but sent a message which Marek Kowalewski read on his behalf.

Similarly the Polish Co-Chair Zyta Szulejewska, a Lady who has done more for Poles in Bristol and the West Country than possibly anyone else was also unable to come. Past Chairman Anne Foot delivered her message.

Much of the funding for our book was provided by The Heritage Lottery Fund. Cherry Ann Knott spoke very generously on their behalf saying that she was genuinely astounded by the enormous value for money that The Heritage Lottery had received as a return for their assistance with funding our book.

To give everyone a flavour of the book, eight members took to the stage to read a series of representative extracts – the power of the book revealed itself as more than one could be seen to be working hard to repress emotions as they read.

Chris officially launched our book by presenting a copy to the Lord Mayor of Bristol, Councillor Faruk Choudhury, asking him to say a few words.

The Lord Mayor spoke very eloquently of his experiences and illustrated how he had also arrived in Bristol as a youngster from a war zone, Bangladesh in his case, and drew interesting parallels between his experience and those of the Polish community nearly half a century earlier.

He was followed by the Polish Rector Fr.Stefan Wylężek who expressed gratitude in the welcome received by Poles in the UK which enabled such positive integration; after which Lady Danusia Trotman-Dickenson made a short speech.

Following the official section of the evening, we were all thrilled when Katy Carr stepped on stage to say a few words and entertain us with a couple of her songs. Just like his predecessor, the Lord Mayor was delighted to belt out a couple of choruses of “Wojtek” along with Katy, Councillor Ian Boulton, the Polish Rector and the rest of the audience.

A fantastic evening was completed with Polish cakes and excited conversations as we distributed books to contributors who excitedly found and read their accounts in print for the first time and the sale of the book to others.

We know everyone will treasure this book for years to come and must conclude with yet another “thank you” to all our contributors without whom there would have been no book.

Sheila shows off the book