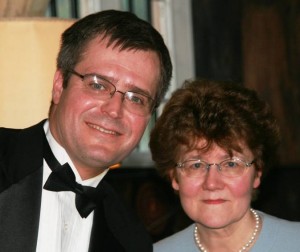 Stanislav with Halina, Countess of Munster

“Better than Nigel Kennedy”; “I wouldn’t have missed it for the world”; “Brilliant”; these were just three of the things members of the select audience at Siston Court said to me after Stanislav finished his recital on Sunday evening. Given that our members know a thing or two about music I need say no more about the quality of playing.

The program was perfectly selected to match the audience as well, with a mixture of classical and jazz works to suit all tastes. All too soon it was over. However, a rousing ovation persuaded Stanislav to return and play a very special encore. This was the piece written for him and dedicated to him by Bartosz Jazdzewski which had been premiered only the night before at POSK. I was lucky enough to attend that concert and like the rest of the audience was delighted at his choice of encore.

Stanislav was also impressed by his audience and remarked to me that “audiences in the USA don’t give any performer the respect I got tonight with everyone silent and listening to me play – I really appreciated that and enjoyed it too.”

We were especially delighted that our President, Halina, Countess of Munster, was able to travel down from London to enjoy the evening with us. At the end of the recital she said a few appreciative words and presented Stanislav with a Bristol Blue Glass Diamond Jubilee commemorative paperweight and a copy of Adam Zamoyski’s “Poland A History” suitably inscribed to mark the occasion.