2010 Concert to commemorate 200th anniversary of the birth of Chopin 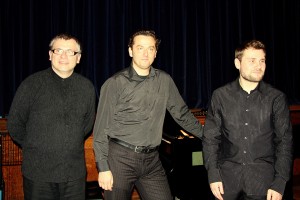 Let me start by thanking Anne Foot and the Bristol and the South West Anglo Polish Society for their invitation to the concert and for their warm hospitality.  Since attending it involves a round trip of some 240 miles I must admit that I had some doubts about coming, however, a sense of duty prevailed.  Rarely has duty been so richly repaid.

I am no cognoscenti of classical music, but I have always believed that our great Polish composer wrote almost exclusively for the piano.  I was therefore intrigued to see a duet and a trio included in the rich programme.  The three musicians involved in the concert, Jan Krzysztof Broja (pianist), Andrzej Bauer (cellist) and Kuba Jakowicz (violinist) are all well known and hugely talented.  They exhibited an almost symbiotic relationship, feeding of one another’s talents, the whole becoming even greater than the sum of the parts.

When I first saw the venue for the concert, Clifton College Preparatory School Hall, I imagined a severe, modern construction.  What a pleasant surprise it was to be met with a historical building and a hall with excellent acoustic properties, a hall holding, I imagine, some 250 people, an audience who were both knowledgeable and appreciative.

In the first part of the concert we started with the extravagant Introduction e Polonaise Brillante in C major op.3 performed by the piano and cello duet.  Thanked by enormous applause the same two musicians continued with the Sonata in G minor op.65.  How nice it was to hear in this the undertones of some of the Polish folk tunes.

A 20 minute interval allowed a brief respite to digest and absorb what we have just experienced.  Even more followed with the Etude in C sharp minor op. 25 nr 7 as arranged by A. Glasnove, followed by the piano and cello being joined by the baby of the family, the violin of Kuba Jakowicz.  The magnificent Trio in G minor op.8 again held the auditorium entranced, the brief breaks between the four parts allowing the occasional cough to be indulged in.  At the conclusion the huge applause called the musicians back to take their bows again and nearly brought the roof down.  I think an enormous thank you is due to the Polish Cultural Institute who cooperated with The Anglo Polish Society in bringing over the musicians and agreeing the content of the concert.  What a start to the Chopin Bicentenary Year 2010.

Our long way back was enlivened by the memories of a concert which will stay with us for a long time to come.