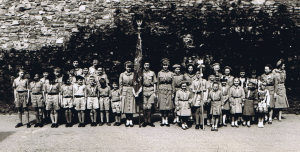 Following the end of WWII, and the majority of Polish soldiers, sailors, airmen and women in the armed forces who had fought alongside the western allies were unable to return to a Soviet dominated Poland.  The British government allowed them to stay in Great Britain.  A Polish Resettlement Corps was raised in 1946 as a corps of the British Army into which Poles were enlisted for the period of their demobilization up to 1948. Disused army and air force camps were utilised as temporary accommodation for the Polish Troops.  Later they were joined by their families who were scattered in Displaced Persons Camps throughout Europe, Africa, India and the Middle East.

The Polish Community in Bristol started rebuilding their shattered lives.  In supporting one another and providing a focal point for cultural, social and sporting activities, various organisations were set up.  One of these organisations was Polish Scouting, true to the roots of the original organisation set up by Andrzej Małkowski 1910.

Blessing of the “Pomorze” Standard and march through Bristol

Polish Scouting was established in Bristol in 1948 initially consisting of six boys, and had their meetings at the home of the Anglo Polish Society in Clifton.  The region was named “Szczecin”.  This small kernel of Polish Scouting soon developed as more children joined, including girls and younger children forming cubs and brownies.

In 1963 the female region “Pomorze” was formed and the standard which was largely funded by the Bristol community and blessed, amid great joy, in Bristol in1964.  The same year, a female detachment of the organisation was formed in our region thus the units became single sexed; 4-dh Scouts, 35-dh Guides, “Biedroniki” Brownies and “Wilki Morskie” Cubs.

Through the intervening years, the scouting units developed, changed, waned and are now developing again.  Today in Bristol we have four units 4-dh Scouts, 35-dh Guides, and two 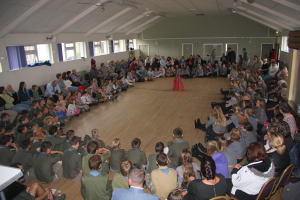 At the beginning of the scouting year in September, our region consisting of many towns (from Bristol in the West, Slough in the East and Plymouth in the South) comes together in celebration to start a new year of adventure, fun and learning.

This year, this celebration “Święto Hufca” is taking place in Bristol on Sunday 15th September and will consist of Mass at 10am at the Polish Church of Our Lady of Ostrabrama on Cheltenham Road, with activites followed by a “campfire” at 3.30pm in St Bonaventures Parish Hall.  Anglo Polish Society members are welcome to attend.