I was pleased to attend the recent concert by Katy Carr and the Aviators, and the short film “Kazik and the Kommander’s Car” held at the Polish Ex-Combatants Association Club, on behalf of the County Commissioner for Avon Scouts, Mr. Dan Wood. 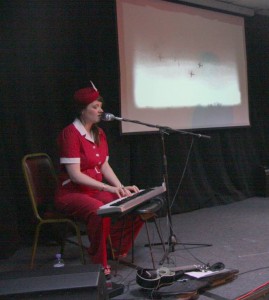 Although prior to the event I had taken the opportunity to watch some of the documentary, I was still unprepared for the raft of emotions during the evening. As Katy

interviewed Kazik, he took us all on a journey – from happier times as a young man, through to the invasion of Poland by the Germans until his terrible incarceration at Auschwitz. After two years at the camp, a friend suggested to Kazik that they could escape using the Kommander’s car. This was a defining moment particularly when Kazik stated in his interview “…that was the spark…” – “…I knew then that it would work if I brought it all together…” [sic].

Watching the animated film on a large screen actually made you feel part of the desperate but ambitious task that the escapees had decided upon. Dressing in the uniforms of the SS (so despised but the only option), emptying the weapons except one that was kept loaded “…in case we fail…we can’t let our friends suffer because of us..”, and then the drive to the checkpoint. Katy’s musical tempo of the tense moments as 80 metres passed, 50 metres passed, until at 15 metres the checkpoint was still not open, and it fell to Kazik to do something – anything. Whatever power helped him at that moment proved that a true belief can enable you to do anything that you have set your heart upon, and in this particular case it was a belief that Kazik and his fellow escapees would succeed…

All around the room, the emotions that evening were not just seen, but felt – by grown men and women, not necessarily Polish, who like me underwent a journey of sadness, horror, despair, hope, and finally thankfulness that Kazik and his friends escaped.

For those of you who weren’t there that night, I am pleased to report that Kazik is alive and well today to pass on a fundamental statement in Scouting, by visiting as many countries as possible to share in his mantra – Do Your Best! It was quite apparent that Kazik’s resourcefulness is down to his early years spent as a Scout, the years following his escape as a member of the Polish Partisans fighting for liberation, and furthermore that resourcefulness, so that even when he was monitored by the Communist regime, Kazik’s beliefs kept him in good spirits. 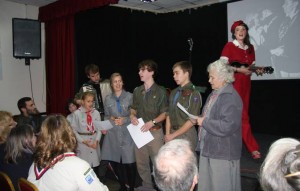 Polish Scouts, Guides and Brownies join Katy Carr in a couple of songs

UK Scouting is slightly difference from Polish Scouting – there is the Beaver Section for 6 – 8 years, Cub Section for 8 – 11 years, Scouts for 10½ to 14 years and Explorer Scouts for ages 14 to 18 years. During the last 12 months Cabot has also launched a Network Section for adults aged 18 – 25 years of age. All our sections are open to both girls and boys.

As District Commissioner for Cabot District within Avon County, my role is to lead and develop 18 Scout Groups including a Group based at the Bristol Children’s Hospital, seven Explorer Units, a Duke of Edinburgh Award Unit and the Ten Tors Hiking Unit.

Since my appointment as District Commissioner, I became aware of a Polish Scout Group meeting regularly at the Church, and it was wonderful to actually meet the leaders and young people that evening. Together I hope that Cabot District and the Polish Group can “go on a journey” to develop the relationship between the Polish Scouting Community and UK Scouting, to enable more young people to experience fun and adventure wherever they may be. I look forward to the day when both UK Scouts and Polish Scouts shout out together at a District or County event – “Be Prepared!”
Isabelle Mills, District Commissioner
Cabot District, Avon County

You can learn more about Katy Carr and her music by visiting her web-site KatyCarr.com

Her outstanding song “Kommander’s Car” with the official music video can be viewed on You Tube.

A promotional video for the film about Kazik and his famous escape.